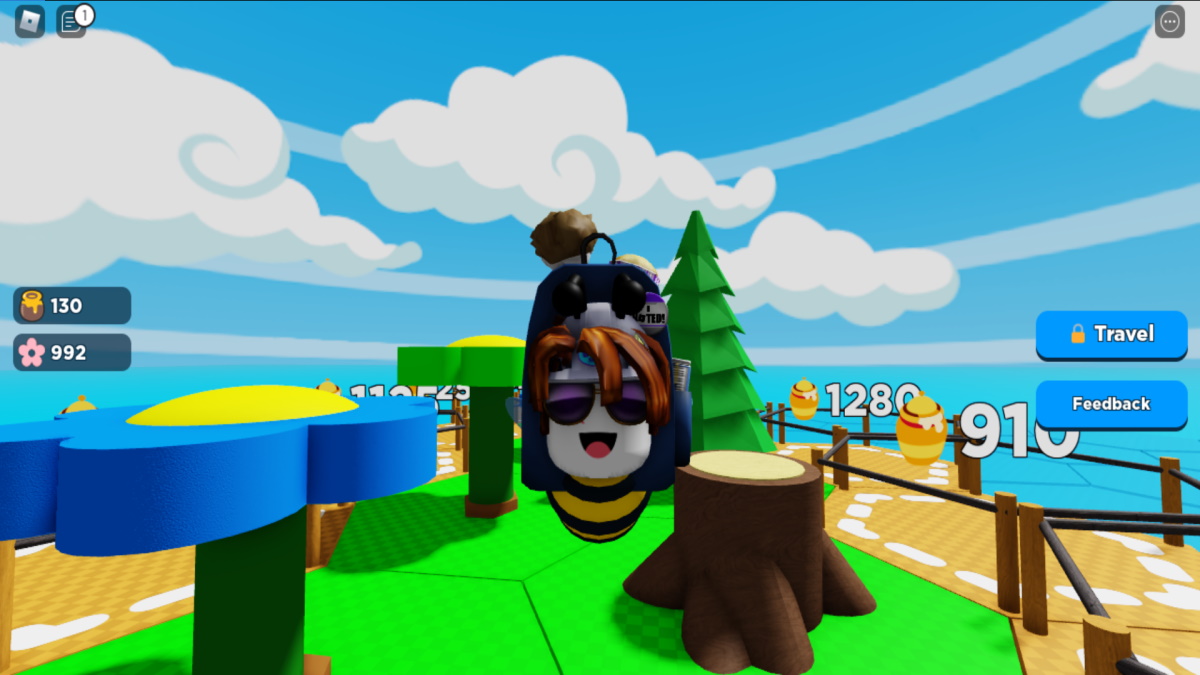 Hello Guys! Welcome to another game guide of an all-new Roblox game that is “Beeface – Be A Bee“. The BeeFace is completely a funny and enjoyable game created on 2/18/2021 by the “StealthWhale” game studio. In this game, players have to collect pollen from the different flowers in the field and enlarge the field.

To enlarge the field, players will need honey to build the small portions of the first world. Players can make honey at the Honeycomb in the middle of the area. Firstly, collect some pollen and visit the honeycomb. It’ll automatically convert the pollen into honey. The converted honey will be half of the amount of the pollen you have collected. (2 Pollen = 1 Honey)

When the player starts to enlarge the field, he will find different kinds of eggs like surprise eggs, common eggs, and more. Each of the eggs contains some gift for the player as pollen, honey, or a worker bee. Worker bees will help the player in collecting pollen and making honey. You can invite and play with your friends and also work on each other’s plot by turning on the “Friends Co-Op” setting in the game.

Basic Steps for Beginners | How To Play The Game?

Different Bees In “Beeface: Be A Bee”

This game has come with Seven types of “Worker bees” till now. Each of them has different colors as well as unique abilities.

Worker Bee has different color variations in the game. To get a bee, the player has to hatch or break an egg that’ll lead him to have a bee. When the player gets a bee, it will help him to collect more pollen and honey. While bees collect pollen from a particular color flower, for example, the red bees will collect pollen from red flowers and the yellow bees will collect from yellow flowers.

The “Enchanted bee” is the rarest bee in the game. Although, it is one of the fastest bees with extremely fast pollen-collecting speed. While players can get this bee from the legendary egg. It has four dragon-shaped wings, which gives her more speed.

The Divine bee is also a rare bee but not as rare as the “Enchanted bee” and it wears the “Super Super Happy Face” as the face. You can get this bee from Epic egg. It is a white color bee with a gold halo on its head and it is the only bee in the game that can glow. It also moves fast and collects pollen with super fast speed as compared to other common bees.

Note: When you travel to another world your worker bees of the previous world will not come with you, because they belong to that world, not to the new world. While your top bees (Mythical and Legendary) will follow you to the next new world.

There is a total of 6 types of eggs in the Roblox BeeFace game. Eggs are the most important part of the game because they give you sometimes worker bees, pollen, and honey as a reward. These eggs can be found when you will spend honey for a new honeycomb and it could be one of the 6 eggs, we mentioned below. As your “honeycomb” plot will increase, the more honey it requires.

However, You can buy eggs and more bee slots for more worker bees in the game.

This is the most common egg in the game that needs less honey to hatch. It produces mostly worker bees of different colors such as Yellow, Orange, and Red.

As its name tells, it produces mostly the best worker bees such as Pink and Red bees. While this egg required more honey to hatch. You can get a Pink bee (legendary bee) in Candy land (World 4).

This is the most honey-demanding egg in the BeeFace game that requires 2132 honey to hatch. It can give you rare bees as well as some flower pollen as a reward.

This egg can give surprise you when you will hatch it. Because it can produce a worker bee or lots of free honey. The surprise egg has light blue circular spots with white background.

To travel in different worlds in Roblox “BeeFace”, you have to first complete your “World 1” plot as you see in the given picture below. Where my first-world plot has been completed. Now break the last purple egg to open a portal and then, you can travel to the next world.

There is a total of 31 worlds in the “BeeFace” game right now where you can travel and collect pollen to make lots of honey. Each world has different themes and shapes, for example, world 1 has a green theme where you can see pine trees, sunflowers, red roses, pink roses, etc. While world 2 has a desert theme with lots of cactus and coconut trees.

There are so many game upgrades in the “Beeface” with you can upgrade your worker bee speed, honey conversion rate, player speed, worker bee capacity, etc.

Now, you can buy lots of honey, eggs, and other miscellaneous items from the item shop…